Coram Boy was my first theatre score. My writing career up until 2005 had been largely in other areas: TV and some film. In 2003 Tom Morris, the artistic director of the Battersea Arts Centre, called to involve me in a scratch project called Newsnight: The Opera, in which I was one of four composers commissioned to set verbatim news transcripts to music.

Tom loved what I did, and when he later moved to the National Theatre as an associate director, he invited me to submit a pitch for a new play; an adaptation of Jamila Gavin's novel Coram Boy.

The central character in the story is Alex, a boy who wishes to pursue a career in music much against the wishes of his aristocratic land-owning family. The composer Handel is an aspirational figure for him, and Handel is a character in the play. The score for the show draws on materials from Handel's works, in particular the opera Theodora and Messiah.

As my first experience of writing for theatre, this project was a real eye-opener for me. It was the first time I had experienced being part of a truly collaborative process.. one in which experimentation without fear of judgement was the norm. 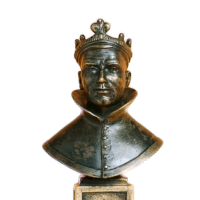 The music score for Coram Boy may be licensed alongside the performing rights of the play; see Nick Hern Books

First produced at the National Theatre, 2005; transferred to Broadway in 2007