Angels in America was an enormous project. It's two plays - Millenium Approaches and Perestroika - with a combined running time of over seven hours, and over 120 music cues.

Originally, its score was going to be based in jazz. Here's the stunning playing of clarinettist Alan Barnes on an early unused cue:

But it became obvious as we reached the tech, and got the scenes on stage, that the play's musical needs couldn't be met by this stylistic choice. We needed a much wider palette. So we switched to something much more cinematic, orchestral and - in Perestroika particularly - grounded in synthesizers, to resonate with music contemporary at the time.

One of the challenges of writing the score for Angels in America was that the issues the play deals with are so sprawling, complex and immense, that finding musical parallels to them - in other words, to generate materials that imbue them - was a tricky process.

We got there in the end though, and while it was a lot of hard work, I'm proud of the result and honoured to have received the Tony nomination for it in 2018. 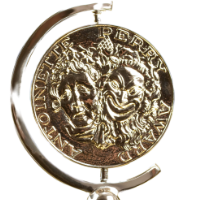 The audiobook of Angels in America, featuring the whole of Adrian's score, is available to purchase

First produced at the National Theatre, 2017, and transferred to Broadway in 2018.